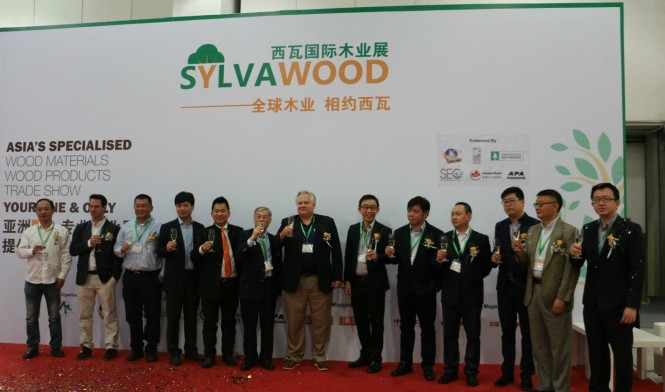 Opening ceremony of Sylva Wood 2016 was officiated by leaders of key wood associations from around the world. Jeff Li BCWood far left.

Sylva Wood 2016 officially opened on June 27 in Shanghai, welcoming exhibitors and visitors from all over the world to Asia’s one and only wood materials show.

“The need to conceive solid business strategy has never been more important at this moment,” said Mr. Pang in his opening address, referring to the importance of the China market in today’s economic climate.

“The ripple effect from the global economic slowdown can be seen and felt tremendously. With the logging ban in China, domestic demand is set to increase with local manufacturers expecting quality materials that cater to their specific requirements. Addressing this, Sylva Wood aims to be the platform to discover pioneering ideas that can challenge norms and create unconventional possibilities for the industry.”

The second edition of Sylva Wood can be said to be truly international with 60 percent exhibitors hailing from overseas. Some notable companies include Rustimber. Ustyanskiy Timber Complex from Russia, the Shin Yang Group from East Malaysia, Vudlande Sawmill from Latvia, EXOR Trading from Germany and Tertu from France.

Sylva Wood 2016 opened doors to the international wood trade on Monday June 27. Asia’s only wood materials and wood products ran from June 27 to 29.

Sylva Wood 2016 drew 10,000 visitors, a majority of whom are professional buyers from the flooring, furniture, cabinetry, doors and windows, and stairs sector. Architects keen to understand Asia and find out more about the international timber market will also be discussing and trading information with exhibitors. The attendance for the second show increased 250% over the First Show in 2015.

The Exhibitors totaled 110 companies and associations representing hardwood and softwood companies from China and 50 countries. The number of exhibitors increased 25% from the previous year. The product groups represented at the show included sawn timber, plywood, particleboard, OSB, MDF/HDF, veneer, engineered wood, laminated wood and wooden house. Softwood sawn timber was a new addition to the show this year. 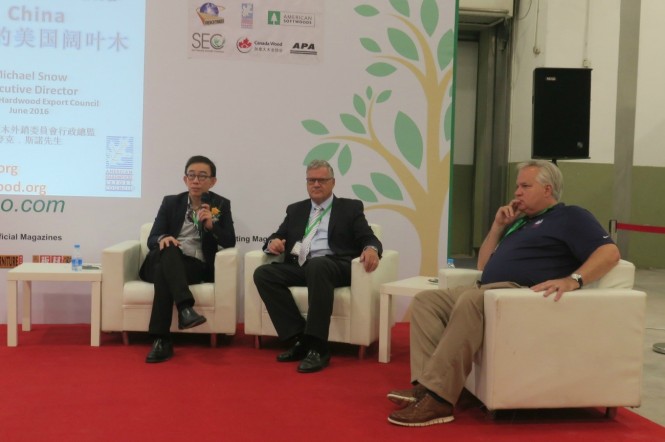 Chinese demand for US hardwood soars to $1.53b

The export value of United States hardwood to China jumped 34 percent year-on-year in 2014 as the country increased its demand for more sustainably sourced materials for its urbanization program and for environmental projects.

The value of US hardwood products sold into China reached $1.53 billion last year, according to data from the foreign agricultural service of the US Department of Agriculture.

The most popular timber was red oak, tulipwood and ash, mainly for furniture, veneers, flooring, and decorative plywood. The market now accounts for 42.6 percent of total export volume of US hardwoods, by far the world’s largest single customer.

Chinese demand for US wood had been focused on the large population centers along the coast－cities such as Shanghai, Guangzhou, Tianjin and Beijing with considerable amounts then re-exported as manufactured goods, as well as consumed locally.

The figures showed that the nation shipped furniture worth $54 billion to the global market last year.

But Mike Snow, executive director of the American Hardwood Export Council, said China’s biggest cities away from the east coast(such as Chongqing, Sichuan province’s capital Chengdu and the capital of Hubei province Wuhan)These cities were traditionally less well-equipped to process timber, are now offering the US industry tremendous opportunities.

John Chan, its regional director for China and Southeast Asia, said before the 2008 global financial crisis, much of the wood bought by China was re-exported in the form of furniture, flooring or other finished products.

Following the collapse of the US housing market and others in Europe, however, many Chinese manufacturers have been looking domestically for sales.

“The result has been ever higher demand for US hardwood,” Chan said.

“Rising wages in China have created an exploding middle class, and new, additional demand for US hardwood products.”

Turnstone Singapore Pte Ltd provides Public Relations and publicity services for wood sector companies, trade associations and government agencies. In particular for American Hardwood, and several other associations and companies at this exposition.

In the afternoon, Mr. Giulio Masotti, founder of Wood-Skin, talked about a patented composite material and how it helps to solve manufacturing dilemma for geometric shapes in wood. 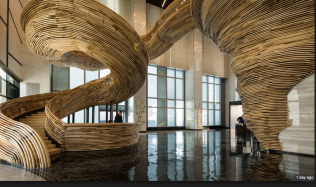 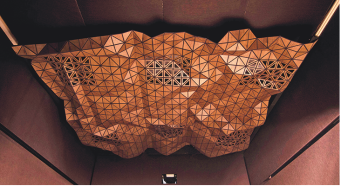 Following the global economic recession, the U.S. hardwood industry’s infrastructure has gone through great change. However, following 5 difficult years with the loss of 40% of its sawmills and a dramatic decrease in production, both the domestic and export markets are now recovering. During the global economic recession, it was China that kept business alive for U.S. hardwood producers; in fact annual exports of U.S. hardwood to China increased by 192% between 2009 and 2012 and are still set to rise. It is estimated that 234 million new households are going to enter the ranks in China in the next 10 years and this extraordinary growth will only further increase the demand for building products. Hardwood logs and lumber are in great demand for wood furniture and flooring manufacturers in southern China.

APP Timber  is the biggest wood manufacturer in Malaysia and an active partner in The Malaysian Timber Council. http://mtc.com.my/ . With over 61 per cent of its land area under natural forest, Malaysia is home to over 2,650 tree species. Continued R&D in forestry has enabled Malaysia’s Permanent Reserved Forests to be managed well, and certified as sustainable, to ensure its perpetuity.

Showcased here are the more commercial Malaysian hardwood species. Malaysian hardwoods have been utilised in various applications, both structural and aesthetic. The multitude of colours and grains provide an opportunity for endless expressions of creativity. India is a dominant buyer of logs. Us and Japan buy wooden furniture. Thailand and China buy sawn timber. Japan is the overwhelming buyer of plywood.

Malaysia has pledged that a minimum of 50% of its land area will be kept under natural forest cover for perpetuity. Currently, 61% of Malaysia’s land area of 32.98 million hectares is covered in natural forests. The forests contain about 2600 hardwood species but 20 are the high valued commercial species. There is an excellent timber product guide in English which identifies species and product uses. Balau is used for decking, Merbau and Kempas for flooring or Dark Red Meranti for doors and windows. Slash and burn agriculture and illegal timber harvest continue to challenge sustainable forest management practises.

Thailand has a population of 64 million on 51.3 million hectares of land of which: Forest Estates comprise 33.5% of area; Agriculture 41% and protected coastal mangrove areas 25.5%. They consume 48 million cubic meters of wood per year. The forest estates are used to grow teak, rubber wood (Hevea) and eucalyptus.

The teak grown in Thailand is 100% used domestically for furniture and decoration industries. Thailand has been importing substantial amounts of teak from Myanmar as well but new Myanmar policies prohibit export. There is still illegal teak imports occurring supervised by the Myanmar army! Key markets are Japan, USA, Australia and EU. China and Indonesia are new emerging markets. Annual wood consumption for furniture and decoration is 15 million m3 per year.

Rubber wood production is 3.4 million cubic meters annually of which 30% used domestically and the rest is exported. The domestic use of the rubber wood is comprehensive for glulam for residential construction, sawn lumber, toys, pallets and crates. Saw waste is converted to OSB or OSL.  Sawdust is used to produce chemicals and bioenergy power. The trees are tapped for rubber production initially and only harvested after sap production falls off.  Thailand imports sawn lumber from Malaysia for residential commercial construction. Their annual new housing is 600,000 units per year. Annual consumption is 10 million m3 per year

Gabon’s forests, which cover an estimated 77% of its land surface, have always supplied many of the necessities of life, especially fuel and shelter. The forests contain over 400 species of trees, with about 100 species suitable for industrial use. Commercial exploitation began as early as 1892, but only in 1913 was okoumé, Gabon’s most valuable wood, introduced to the international market.

Gabon supplies 90% of the world’s okoumé, which makes excellent plywood, and also produces hardwoods, such as mahogany, kevazingo, and ebony. Other woods are dibetou (tiger wood or African walnut), movingui (Nigerian satinwood), and zingana (Zebrano or zebrawood). Round wood removals were estimated at 400 million cubic meters.

Exploitation had been hampered, to some extent, by the inadequacy of transportation infrastructure, a deficiency now alleviated by the Trans-Gabon Railway and Ndjole-Bitam highway (built by China). Reforestation has been continuously promoted, and selective thinning and clearing have prevented the okoumé from being forced out by other species. Over 50 firms are engaged in exploitation of Gabon’s forests. Logging concessions covering about 50,000 square kilometers (19,000 sq. mi) have been granted by the government, with the development of the least accessible areas largely carried out by foreign firms. Traditional demand in Europe for African lumber products has declined in recent years; during the 1980s, European demand for okoumé dropped by almost one-third. Markets in Japan, Morocco, and Israel, however, have become more receptive to African imports.

A novel feature this year was wall panel designs using American Hardwood species. There were 17 designs. Visitors were asked to vote on them.

This gentlemen is based in Singapore. Will pass on presentation if Sylva Wood provides. 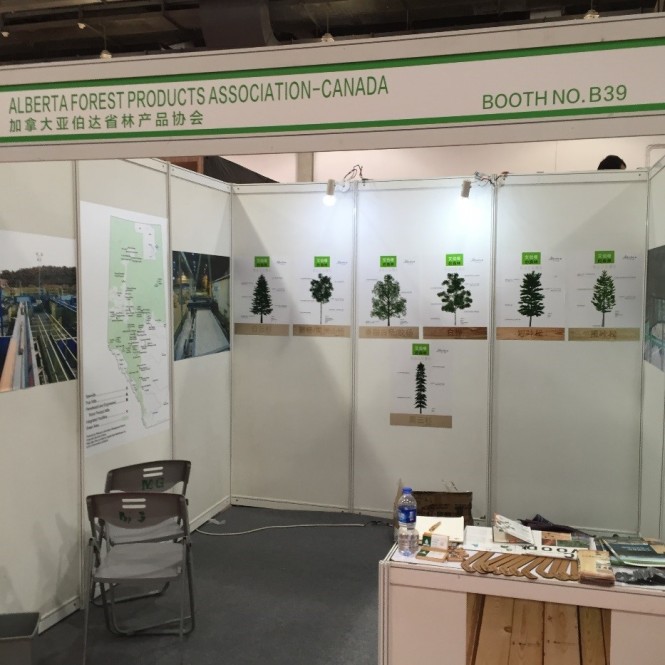 There was a lot of interest in our appearance at this new exhibition softwood exhibitors were absent at the first show. The focus of Sylva Wood is and will be hardwood and furniture. Director William Pang wants to expand the wooden building aspects at the show and will recruit more softwood associations and companies going forward.